All excursions must be paid for individually – it is possible to reserve your place on an excursion up until 2017-06-30. If you sign up for an excursion later, we will not be able to guarantee a free place.

Are you curious why this year SES will take place in exactly this city, or why it was elected as Unesko world heritage area? Are you interested in history, the Middle Ages, mining work, minerals, precious metals (gold, silver) or simply want to explore a bit more in detail where you are going to spend a week? Then participate this excursion! The experienced local guide will tell you interesting stories about the town and about its important events, personalities and points of interest.

We will go for a walk through the city, visit the old castle and the tourist office which hosts an exposition of minerals and the mining drift "Michal".

The mining museum in nature is both an above and below ground exposition. The above ground part shows mining buildings and equipment of whole Slovakia, the geologic exposition and a collection of mining machines. The highlight is the visit of the mine Bartolomeo. In a mining coat, with helmet and lamp you will experience the conditions, under which the miners lived at that time, yourself.

The path of the excursion will make you familiar with the mining work of the 17th till the 19th century, with old mining tools and equipment. This museum is one of the most visited places in the region.

Make absolutely sure to bring: solid and closed shoes (no sandals), warm clothes - long trousers and long-sleeved pullover/jacket (in the mine there are only 12° Celsius/ 54° Fahrenheit!!).

The main goal of this delightful excursion will be the mine with the somewhat strange name “Starovšechsvätých” (old-all-saints). The mine is one of the oldest and most beautiful in the whole region. The first written mention of it was in 1378, but it is much older. In 1751 the emperor Francis I, husband of Maria Theresa, visited the mine, later also the prince royal Leopold II and Josef II. We will visit the below ground mine, in its original state, and will have an authentic miner's experience. We will be shown the more than 700 years of evolution of miner's work.

Make absolutely sure to bring: solid and closed shoes (no sandals), warm clothes - long trousers and long-sleeved pullover/jacket (in the mine there are only 12° Celsius/ 54° Fahrenheit!!).

Please note: not suitable for people with claustrophobia (fear of closed/narrow spaces). 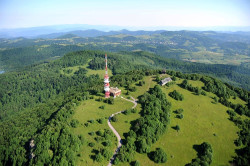 You don't want to get up too early to participate the whole-day excursion, don't have the money or simply look for something else at this day? Then we recommend you this excursion!

There are two options: for water (and sleep) lovers we will just go to the most famous lake in the region - Počúvadlo (means something like "headphones"), where you can simply relax, swim, sunbath and so on.

For the more touristically inclined participants, we offer a very worthwhile walk to the summit Sitno with its beautiful panorama. At the summit there is a nice cottage where we can rest a bit. On the way back we will collect the swimmers and go back to the SES venue together (to continue with the evening/night program).

Sitno (1009 meters) is the highest summit in the mountains Štiavnické vrchy and at the same time it is the starting point of European tourism. From its summit you have a wide overview of the surroundings. Already in 1736-38 the owner of the castle in Svätý Anton, Jozef Koháry, constructed on Sitno a lookout point, the first in Europe. On the summit there also was a castle in the 13th century, whose remains are still visible today.

The lake Počúvadlianske jazero is a man-made lake of 12 hectars and is one of the most vizited places in the region.

Bring your bathing suit, towel and something to eat. It is also possible to eat something on-site (restaurant, hotel).

We will visit the beautiful town of Zvolen, one of the most ancient towns in Slovakia. The first written mention dates back from 1135, and it became a free royal town in 1238.

Zvolen is situated south of Zvolenská kotlina (deep valley of Zvolen) at the junction of the rivers Hron and Slatina and a part of its territory belongs to the Javorie mountains. There are important major roads and railroads to Prievidza, Banská Bystrica and Krupina. 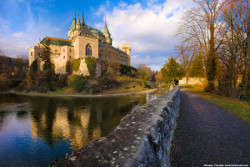 Bojnice is a spa in central Slovakia. The warm springs have been mentioned in documents from as early as the 13th century. In 1938, the world-famous company Baťa bought the baths; later, they belonged to the state, and since 1995 they are a joint-stock company.

The history of the spa is inseparably connected with Bojnice Castle. It is a Romantic castle with a base partially Gothic and Renaissance. The castle appears in numerous films, and is the site of the well-known Festival of Spirits and Monsters every year, which is very popular with children. Nowadays, it is administered by the Slovak National Museum. Underneath the castle, there is also an open cave, and in an adjacent large park, the oldest tree in Slovakia grows: a lime tree about 700 years old.

During the excursion, we will also visit the famous zoo. Recently, its focus has been on informing the public about endangered animal species, including the Roloway monkey and the Bongo antelope.

At first we will visit the town Banský Bystrica and its city center. There will be sightseeing, spare time to go for a walk, souvenirs and lunch. Afterwards we will visit the charming fairy-tale-city of Habakuky, which was inspired and constructed based on slovak tales.

For the more touristically-inclined participants the journey continues till Donovaly at the summit Zvolen (not rilated to the town with the same name), where we can enjoy a beautiful panorama - an absolutely recommendable experience!