In order to know the timetable of all the trains and inter-city buses within Slovakia as well as between Slovakia and its neighboring countries, use this excellent website: cp.sk. Available in Slovak, English and German (you can change the language in the lower side of the page) the website gives you precise information about the connections. If you have a student confirmation document, please take it with you and present it while buying tickets: you can often have discounts.

The nearest international airports to Liptovský Mikuláš are these:

Useful websites where you can find flights and compare prices of various airlines are Kiwi.com and Skyscanner.

The companies RegioJet and FlixBus run international connections between Liptovský Mikuláš and many other European cities. It is possible to get to Bratislava and Vienna also by Eurolines.

From Bratislava to Liptovský Mikuláš

Direct trains run frequently from Bratislava to Liptovský Mikuláš (at least every half an hour). The InterCity trains are a little more expensive, but faster (the journey takes 2:57 instead of 3:41 or 4:12). The free trains do not work here, but you can still receive a discount with ISIC card. At cp.sk search for connections from "Bratislava" to "Liptovský Mikuláš".

The same railway line, apart from others, also runs through Žilina, Poprad and Košice. If you come to one of those towns, you can easily get to Liptovský Mikuláš.

In Slovakia, several groups of people enjoy "free trains". This applies only for second-class cars and is not applicable at all for InterCity trains (see details at the official website of Slovak Railways). It applies only for trains run by the state railways and not for other companies such as LEO Express or RegioJet.

The Czech companies LEO Express and RegioJet offer cheap direct train tickets to Liptovský Mikuláš, among others, from Czech cities such as Prague and Ostrava.

By "caravan" (travelling by train in a group)

A "caravan" is a fun and cheap way to travel: you can get to know other participants before the event even starts, and travelling in a group gives access to significantly discounted rail tickets.

A caravan in planned from Strasbourg through Germany (Karlshühe, Ulm, Munich, Passau) and Austria (Linz, Amstetten, Vienna). You can download the full timetables and prices. If you're interested in joining the caravan, please contact ses@ikso.net and we will put you in touch with the rest of the group.

From Vienna to Bratislava

There are frequent buses from the Vienna airport (VIE) coming to Bratislava every hour. The journey takes around an hour. You can get off either at the Bratislava airport ("Bratislava,,letisko") or at the main bus station ("Bratislava,,AS MHD"). Please check the route of the bus you choose to see where it stops in Bratislava. It's possible to book the tickets online or simply buy them directly from the driver. At cp.sk search for connections from "Wien,,Flughafen Wien" to "Bratislava".

You can use the city transport (buses, trams, trolleybuses) in the capital. Definitely buy a ticket before getting on a vehicle and keep in mind that you have to validate it (there are special machines for this in every public transport passenger vehicle, very easy to spot). You can buy them at ticket vending machines at stations, or at the several news-stands right next to the main train station.

You can buy tickets for the public transport in Bratislava in orange vending machines at the bus stops and tram stops. You need to have euro coins for that. A basic 15-minute ticket costs 0,70 €, a 30-minute one costs 0,90 €, and a 60-minute one - 1,20 €. Children under 15, student under 25 and people over 62 have a 50% discount (see the detailed fees). A ticket lets you change a vehicle anytime you want.

In Liptovský Mikuláš, the train and bus stations are situated right next to each other. Getting to the location of SES on foot, takes 30 minutes ( see the map, which we prepared).

It is also possible to travel by the town's public transport, but the connections aren't as frequent (you can checkhere, the nearest bus stop is Palúdzka, SOUP). We recommend taking a taxi.

Taking a taxi to the site from the station costs 2 or 3 euro, which you can split if traveling in a group. 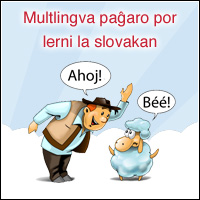 A small bit of practical advice: learn some basic vocabulary in Slovak :) E@I created a web site for learning Slovak. You can find a list of the most useful phrases here: http://slovake.eu/learning/intro/phrases.

During SES, you will be able to buy an Esperanto booklet entitled Slovaka konversacio skize (a sketch of Slovak conversation) at Libroservo (book store).